A midweek away game is the bane of non-league managers and players alike. Heavy traffic, arranging time off work, travelling long distances are just a few of the problems encountered. Management and players can often expect to arrive back home in the early hours of the morning.

On Tuesday night Imrul Gazi led his squad down the A12 to Ipswich. This was newly installed Sporting manager Imrul Gazi’s 2nd competitive game in charge having drawn the reverse fixture 0-0 at home. The replay proved to be a historic encounter as Sporting reached the preliminary round of the FA cup for the first time in their history. 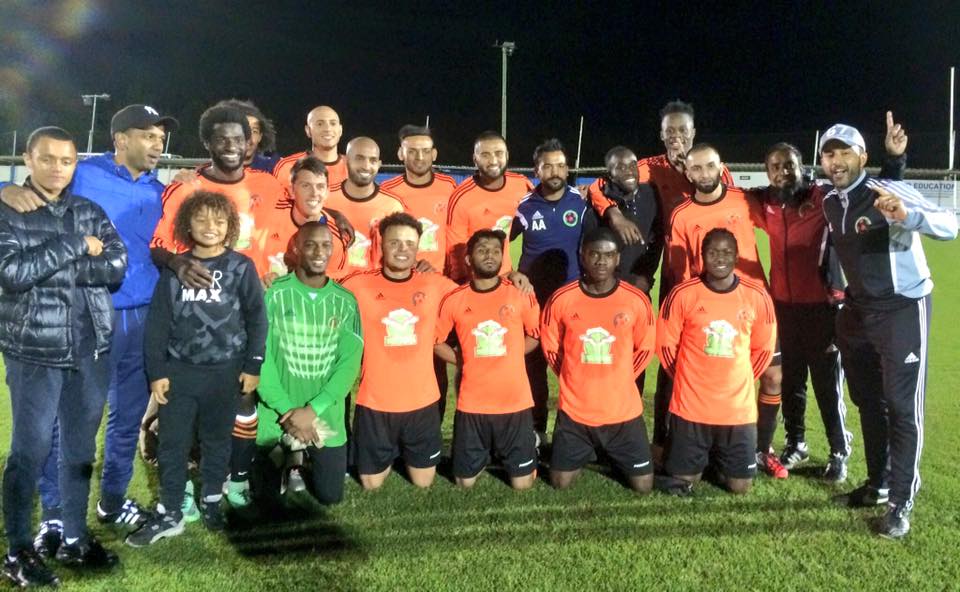 Gazi had to reorganise his side with enforced changes due to injury and players being unavailable, Experienced Sporting stalwarts Oli Rahman and Javier Rivera were missing, replaced by Ashaan moving from the wing in to his favoured attacking midfield role and Codey Cameron replacing Ash on the wing.

Ipswich Wanderers were visibly up for this encounter with a decent home following urging them on from the stands. Wanderers had reached last year’s quarter final stage of the FA Vase and fans were eager for a repeat performance. Any complacency had been dispelled after Sporting’s display in the first game where they were by general consensus the better side, only going to a replay due to failure to convert an array of chances.

The game started adversely for the youthful Sporting Bengal side as experienced defender Louis Adjei limped off with a hamstring injury within the first 10 minutes, he was replaced by Joshua Adjei.

The first half was an even competitive affair with both sides stuck in stalemate with neither midfield able to gain the initiative; Wanderers had the slight upper hand. There were chances at both ends with the impressive youngster Ashaan Siddik looking to create opportunities, playing in between the lines. Wanderers looked dangerous on the counter and due to the occasional nervy misjudgement by the relatively new Sporting defensive unit.

The dead lock was broken on the 41st minute with Sporting Bengal’s Codey Cameron getting his name on the score sheet. The goal was the culmination of good build up play on the Sporting right flank involving David and Ashaan; quick incisive passing resulted in Codey prodding home from close range. A similar chance was previously thwarted by the |Impressive Wanderers Goalkeeper James Bradbrook as Chris Wright was denied from close range.

Wanderers had to force the initiative in the second half as they trailed going into the break. In the second half Ipswich huffed and puffed with little goalmouth action or guile as Sporting skipper Freddy Tandon marshalled his impressive defensive unit, all of whom had outstanding displays. The wave of attacks failed to materialise as the Sporting defence held firm.

However, Sporting keeper Dwayne Esprit did have to pull off a couple of superb saves from distance as Wanders attempted to get back into the game. Firstly he was equal to a 30 yard screamer which looked like it was heading for the top corner. He was called into action again from another free kick. Esprit displayed expert handling as Wanderers forwards rushed in hoping to snap up any spillages.

Sporting sealed the famous win in the dying minutes of the game via a rapid counter attack. Again it was that man Ashaan Siddik who broke with a powerful run down the left wing; he managed to pick out current summer league top goal scorer Chris Wright who slotted home. It was a deserved goal in recognition of his constant hassling and closing down Wanderers defence on the night.

Two games in 48 hours started taking in its toll on both sides. Gazi brought on fresh legs with three youngsters making their debuts for the club. Incidentally all three replacements were under 20 years of age, further highlighting Gazi’s ethos of bringing through young players.

The final whistle blew, there were scenes of relief and jubilation form the Sporting cam, a well-deserved victory against the odds. The majority of pundits had predicted a comfortable win for the Thurlow Nunn outfit following their FA Vase exploits of last season.

It was difficult to single out an outstanding individual as it was a real team effort with many solid displays from this youthful looking Bengal side. However, Ashaan Siddik provided the two moments of quality that turned the game in Bengal’s favour, assisting both goals.

The Manager Imrul Gazi said “to a man the players were immense & showed so much character. All the players were selected from our BFA Summer league, which is a massive compliment to them. Bodes well for the fixtures coming up. It’s a proud moment for the team & our community.”

Next up is a mouth-watering clash at home against our fellow east Enders Clapton FC and possibly 300 of their ‘ultras’. This promises to be a loud and raucous encounter.