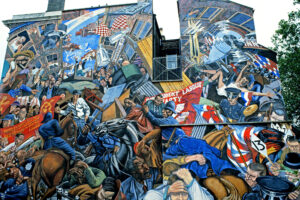 “Outside Mark Lane station the crowd closed in on six of Mosley’s men, and before the police could do anything three of the Fascists had been knocked down and were bleeding profusely from head-wounds. One of them had been hit on the head with a bottle. Several men and women were hurt in a fierce exchange of blows…. But the police precautions enabled the rest of the Fascists to assemble unmolested. They formed in military formation, a column of 3,000 stretching for half a mile, with over 200 black-bloused women in the centre…. The Blackshirts jeered back at distant booing. ‘The Yids, the Yids, we are going to get rid of the Yids’, they chanted, or, ‘M-0-S-L-E-Y, we want Mosley’, to which the crowd shouted back, ‘So do we, dead or alive’. New detachments arrived in the steel-protected Fascist vans, behind steel-wire meshing Police attempted to clear the streets close to Royal Mint Street with repeated baton charges. Workers responded with stones, fireworks and marbles hurled under horses’ hooves chanting “They shall not pass!”. Daily Herald.