Tower Hamlets Council is to issue £20 fines to drivers who leave their engine running when they are parked. The penalty will go up to £40 if the fine isn’t paid in 28 days.

The new policy which aims to reduce air pollution across the borough is part of the council’s campaign, #BreatheClean. The campaign will focus on drivers who idle outside schools.

Over 50 per cent of pollution that damages health comes from cars and other vehicles and 7.4 per cent of all deaths in Tower Hamlets in people over the age of 30 are caused by air pollution.

40 per cent of residents live in areas of that exceed government and EU legal levels, and this particularly affects children and people with underlying breathing complaints.

Research by King’s College found that children in Tower Hamlets had up to 10% less lung capacity than the national average as a result of air pollution.

John Biggs, Mayor of Tower Hamlets, said:
“Cleaning up our air quality is a key priority, which is why we have launched our ‘Breathe Clean’ campaign.
“Vehicle exhaust fumes are one of the biggest contributors to pollution in Tower Hamlets, and poor air quality can have a particular impact on our young people’s lung development and on residents with underlying health conditions.
“We are telling drivers not to leave their engines running unnecessarily, through educating them on the impact and where necessary through enforcement.”

Councillor Rachel Blake, Cabinet Member for Air Quality added:
“Engines that are left to idle cause hot spots of pollution that affect both passers by and people in the car itself.
“Using cars less, and walking or cycling on short journeys more, is good for us, it’s good for the environment and it’s key to reducing air pollution in Tower Hamlets and across the capital.”

However, the fines will only be issued if drivers refuse to switch off their engine when asked to by a council officer.

Regulation 98(2) of the Road Vehicles (Construction and Use) Regulations 1986 sets out the circumstances where vehicles are permitted to be stationary with the engine running:

• When vehicles are queuing at traffic lights

• Where a vehicle is propelled by gas produced by the functioning of plant carried on the vehicle. 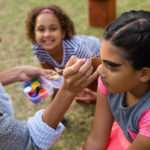