Roads and Transport Policing officers investigating a collision in Limehouse which occurred on New Year’s Eve in December 2015 are appealing for the public’s help in identifying the driver who failed to remain at the scene.

On Thursday, 31 December 2015 shortly before 16:30hrs a black Volkswagen Passat (reg RF57 FSD – later reported as stolen from Canning Town) was in collision with a grey Renault Scenic and then a black London taxi westbound in the East India Dock Road tunnel, E14.

The driver of the Passat – described as a black man in his 20s – and his passenger – a woman walking with a limp, also aged in her 20s – left the scene prior to police arrival. They made their way out of the tunnel walking eastbound.

Two passengers from the Renault Scenic suffered minor injuries – a 46-year-old woman and a 15-year-old boy – and were treated at the scene by the London Ambulance Service. The driver of the taxi was uninjured.

A passenger from the Scenic was able to film the driver of the Passat as he was spoken to by members of the public after returning to collect a sports bag from car.

Enquiries by officers to identify this man have so far been unsuccessful and officers are appealing for anyone who recognises the man, or who think they know who he is, is asked to contact them. 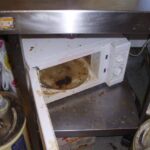