The Tower Hamlets Mayor and Local Councillors are to going to ‘debate’ their pay rises on Wednesday 18th May 2016 at the Annual Council Meeting.

The pay rise would come just as John Biggs lost his salary from being GLA member.

In 2010, Labour, Conservative and Liberal Democrats councillors all voted in favour of the lowering the pay of ex-mayor Lutfur Rahman but now they want to increase it.

At the time Joshua Peck, Bow West Councillor, who fought for a lower salary for the mayor said: “£65,000 is the right salary, it is a good salary.”

In response to his pay being cut ex-mayor Lutfur Rahman said: “Let me say, I don’t do this for money but let me remind you I have given up a successful legal career and a partnership in a legal firm… What drives me is will and the urge to serve. I am happy with whatever I am paid.” 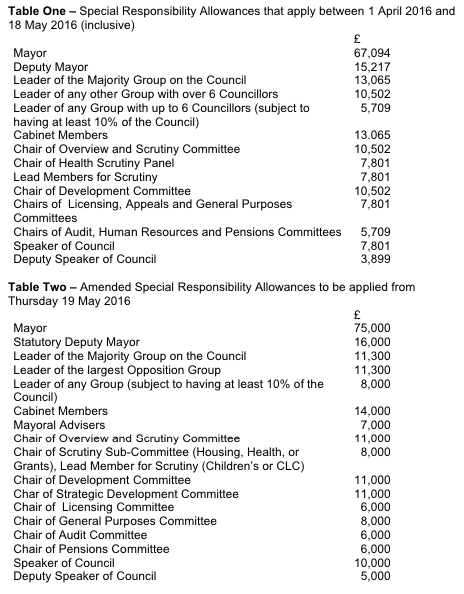 The proposals up for debate are pay rises that will be higher than inflation. Basic pay for all councillors will go up by 5.3%. Leader of the opposition will go up 7.5% to £11,300 and Tory leader Peter Golds would have a 40% increase as a councillor from £5,709 to £8,000, just because is the leader of a party.