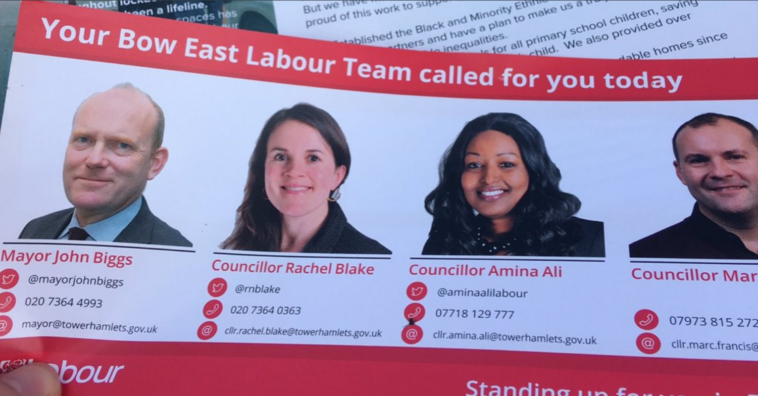 The mayor of Tower Hamlets, John Biggs, has been using council resources to politically campaign for Labour.

A Labour Party leaflet for John Biggs, which was posted through letterboxes on the Island and all the way to Bow, had the town hall phone number and John Biggs’ official email address.

The council’s monitoring officer sent a message on October 18 to remind members that council resources, including email addresses and telephone numbers, are not to be used for campaigning or party political activity.

The councils legal monitoring officer is following up complaints about “facilities being used to promote a political party”.

Complaints were made about the leaflet from households in Manchester Road, the nearby Chapel House Estate, Lanterns Court in Millharbour Road and from Bow Quarter housing complex in Fairfield Road.

The mayor has acknowledged the leaflets were put out by Labour but has denied allegations of using council resources to politically campaign for Labour.

Mayor Biggs’ party agent Graham Taylor said Labour “upholds principles of conduct in public life” and asked how can “giving out mayor Biggs’ contact details be an abuse of power?”

“We believe in letting residents get in touch so that John can help them.”

The mayor was recently recruiting a case worker who may have to answer emails as thousands of Labour Party leaflets were being delivered with a council email address and phone number on them. The caseworker would be paid using council funds.

Cllr Wood also said “Labour Party Cllrs involved in distributing these leaflets will need to consider their position on this especially members of the Standards Advisory Committee.”

The council’s monitoring officer is now looking at whether the leaflet breaches rules governing elections, it has been confirmed.